When I was researching things to do in China, Huang Shan (Yellow Mountain) was one of the first things that I came across. It is a mountain range with over 1,000 peaks in Anhui province. For a person who grew up in a country where the highest point above the sea level is 294 m, mountains have always seemed to be really exotic. No wonder Huang Shan became one of my top priorities to visit in China.

It was the end of the third week of my exchange programme in China. For the first two weeks we were studying Chinese language and culture, but a few days ago we started design and manufacturing course, which wasn’t that much fun. A lot of classes were entirely in Chinese and the translation was poor, so we’d sit in the classroom for an hour listening to the subject in Chinese just to get a quick 5 minute summary afterwards on what was said. Yes, we were excited about the weekend!

Five of us decided to miss a class on Friday afternoon and instead jumped into the bus going to Tangkou. Six hour journey to Huang Shan was waiting for us! I got to sit next to a middle age man who could actually speak good enough English and we were chatting the entire time. He was going to his son’s wedding and of course he was really excited. He told me a lot about Chinese wedding traditions and his worries about the rhythm of life nowadays. Everything is too fast, too stressful.

It was already dark when we got to Tangkou. A random man got into a bus as soon as it stopped and started asking where we’re staying. We replied saying that we were going to Mr Hu’s hotel. He made a few phone calls and after a few minutes a big black car came to pick us up. It was Mr Hu himself! We said bye to the first three guys, thinking that we might not see them ever again. We were wrong. Mr Hu was a great guy and the stay with him was an absolute pleasure. Not only he picked us up from the bus station, but also the hotel was lovely and he helped us to get to and from the bus stop for Huang Shan.

On Saturday we woke up early in the morning, got into the bus, which took us to the starting point and started climbing. Huangshan is said to have over 60,000 steps and even though we definitely did not climb every single one, it did feel like a lot.

At the beginning we were just wondering in a very thick mist (or clouds, hard to say) and could not see much. I think some kids got bored of staring at the grey wall and formed a local basketball team. Of course we joined them as well. 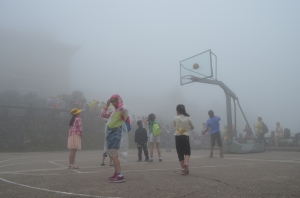 After a bit more time of wandering in grey we got to see the real monkeys! It was my first time seeing monkeys outside the zoo and I was more excited about them than Huang Shan. 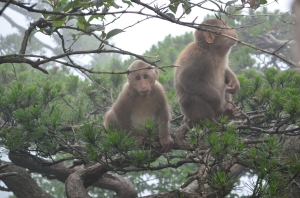 For a quick moment clouds cleared out and I was lucky enough to manage to take a photo quickly.

However, after a while it turned out that that quick moment of beauty was not just a random one. The sky cleared out completely and the views were absolutely breathtaking. 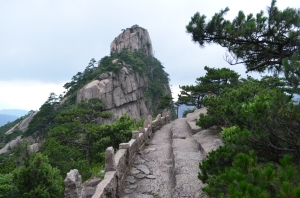 We spend a while wandering around. It was an absolutely great day and everyone was in a good mood. It was time to find the way out and catch the bus back to the hotel. And then it started raining! It was pouring so badly that within the seconds everyone was wet from head to toes. There was no point in trying to get a cable car down, as the queue was ginormous. We weren’t sure how to get down and we spent quite a while running around looking for the right path. It was getting dark and we were at risk of missing the last bus. For people like us who were absolutely soaked and with no food supplies, it was not the best option. We started panicking.

It took as a while to find the right path down. Remember those over 60,000 steps that I have mentioned before? Yes, the legs were refusing to bend and everyone was extremely tired. Going back to Mr Hu’s and having a hot shower was all we needed for the perfect end of the day.