Nepal never really associated to me with elephants, rhinos, crocodiles but I got to see them all there! The south of the country is very different from the north and that was completely unexpected to me (you can even get malaria there!).

A bus ride to Chitwan National park from Kathmandu was one of the most unpleasant I got to experience in Nepal. The park is about 170km away from Kathmandu, however it will take you at least 5 hours to get there, depending on the traffic and luck. I think it took us about 7, but I know someone who was stuck in the bus for about 11 hours. The closer you get to Chitwan the hotter it gets and even the open windows don’t do anything when the traffic is moving slow. Actually, it’s even worse to have the windows open – the roads are in such a poor condition that there is always a cloud of dust in the air.

So after several hours in the bus I arrived in Chitwan all covered in layers of dust, unable to handle the scorching heat and having to deal with the super annoying taxi drivers who jumped on us with their offers as soon as we got out of the bus. We found a place to stay and ordered some food (pizzas) there, which turned out to be a huge mistake. Every weekend, after spending all week eating vegan curries, we were craving for something meaty or cheesy or both. Even in Kathmandu it’s easy to get a food poisoning, but we didn’t realise Chitwan was the hell for it. I have mentioned in my previous posts that the power is only supplied for several hours a day, so loads of places have their own generators. Ours didn’t, but I realised that too late.

We spent the rest of the day wandering around the village and arranged a two hour canoe trip followed by three hour jungle walk for the next day. The village was peaceful and we even got to see a rhino and couple of elephants that evening. 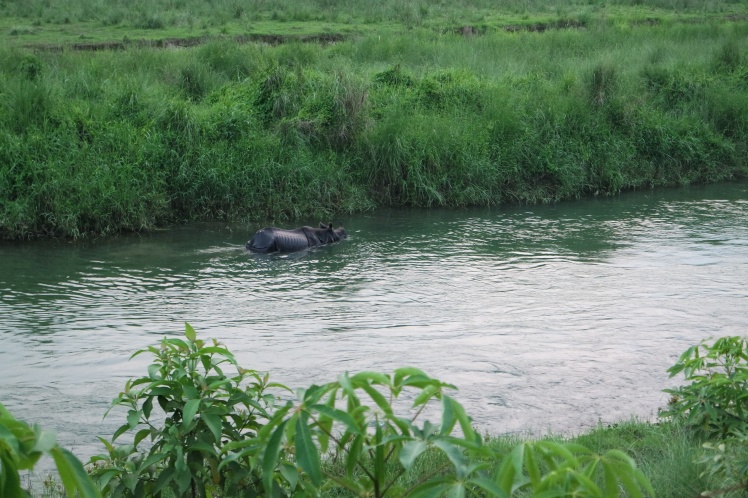 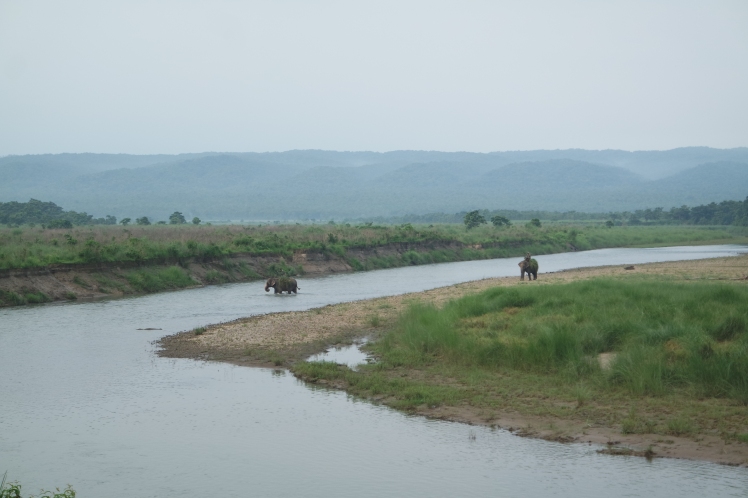 The bacteria from a cheesy pizza showed all the power at very early hours of the morning. The morning felt like an eternity and I really didn’t feel like going anywhere. Imagine my fear of getting into a canoe while being unsure whether my body can contain its own fluids…

I decided to be brave and got to the riverside. Four of us and two guides got into the wee wooden really unstable canoe and starting going down the river full of crocodiles. However, I didn’t have time to think about the dangers of doing it, since I had my stomach to worry about. 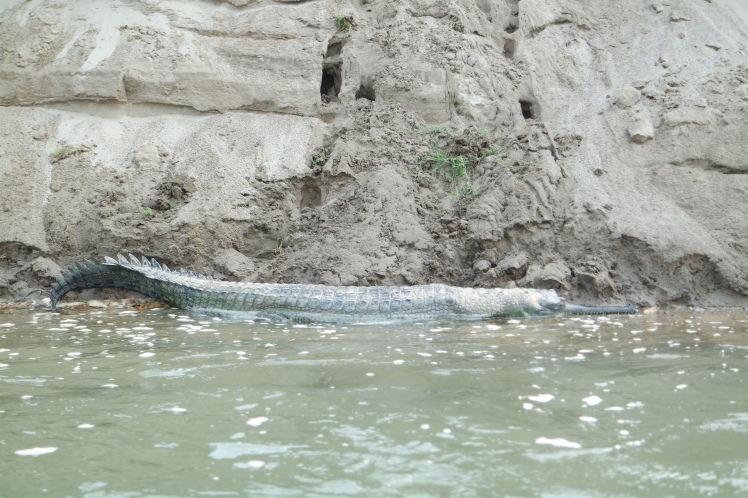 Otherwise, the canoe ride was extremely peaceful – we started just before the sunrise, so there weren’t anyone around, it was so quiet and beautiful. There were loads of birds around and I enjoyed spotting loads of Kingfishers . 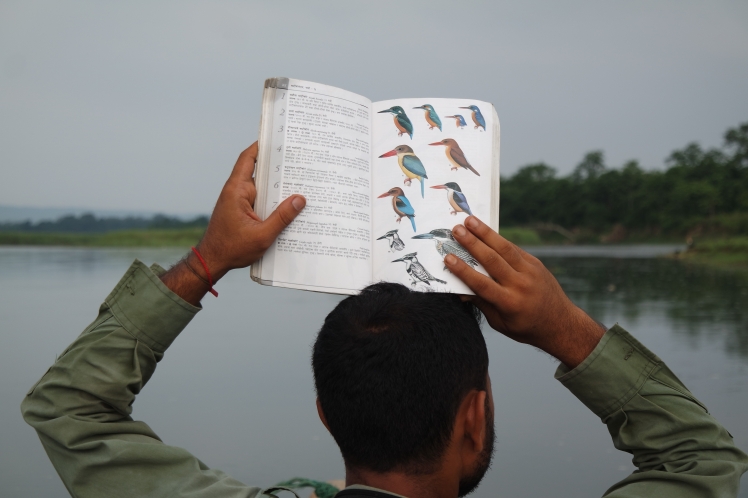 I survived the canoe trip and then the jungle walk started. It was the rainy season so the grass was about 5m high. We were expecting some wild animals to jump out any moment, but nothing like it happened. It was starting to get hot and we had three hours of walking left… I started feeling better from my food poisoning, so that lifted up my mood a bit.

It was a cool walk. The thrill was always there and you could never know what might appear from around the corner. We spotted some rhinos, deer and wild elephants. 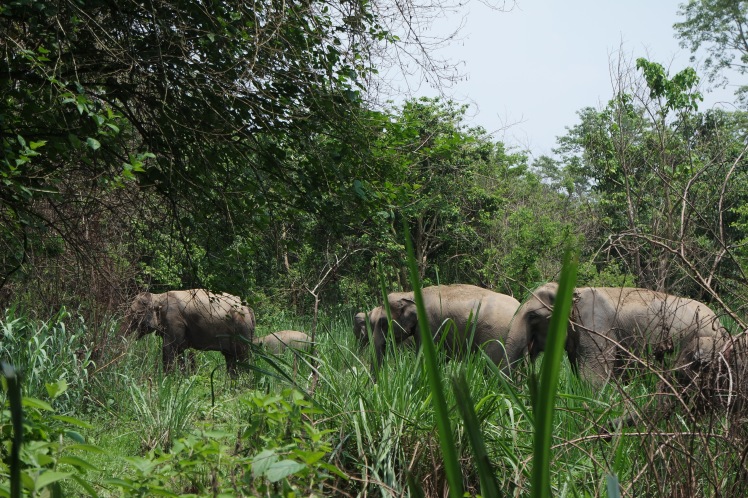 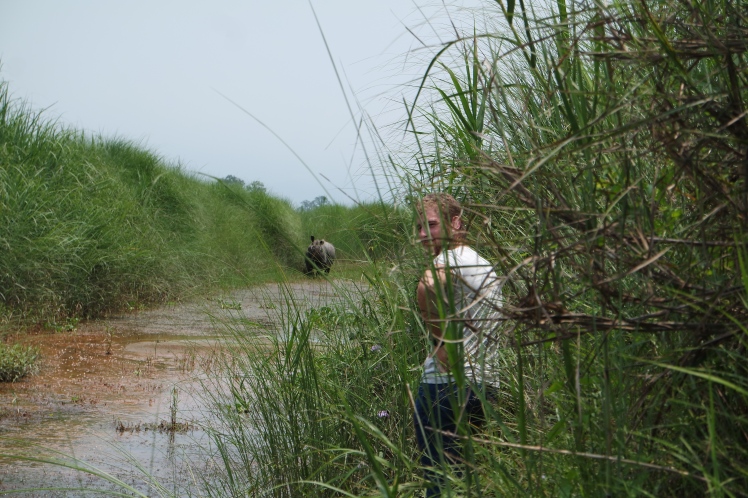 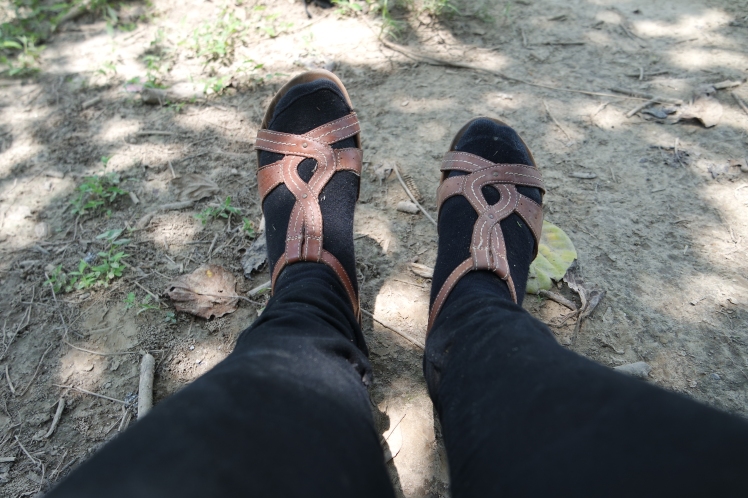 At the and of the walk we were exhausted. The heat was terrible and I never knew I could sweat so much! After the walk we got back and downed litres of water. No amount seemed to be enough.

Later on that day we got offered to go on an elephant ride and agreed to it. That was a mistake and I will never ever ride an elephant again. I didn’t do my research beforehand and never realised the problems related to this activity. The elephants were poorly treated and they were hit every time they didn’t want to do something. It really seemed like a cruel way to make money, but loads of people didn’t seem to have problem with it. I am just going to leave this photo here as a reminder than not everything that sounds exotic and cool is fair and the animals shouldn’t be mistreated for the sake of tourism and making money. 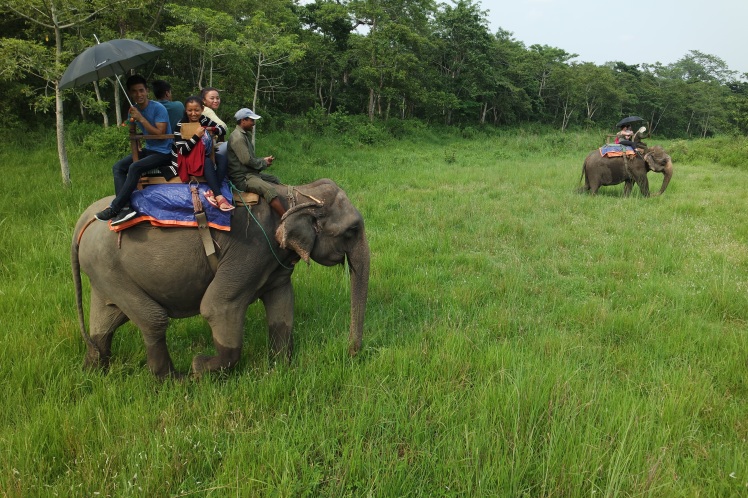 We left the next morning to get back to Kavresthali. I didn’t enjoy Chitwan too much but I guess it was mostly due to the food poisoning and I didn’t really have too much time to explore the park. Maybe that’s why I kept delaying writing about this place…