Well this is going to be my last post about Thailand. I spent my last few days in Ao Nang area and it was a nice spot to finish my holiday. It also gave a beginning to a new hobby.

We wanted to go to Railay but picked Ao Nang just to keep the accommodation costs low, since we thought Railay was slightly too expensive. I wouldn’t call Ao Nang an extremely exciting place, you can watch some nice sunsets from the beach and it’s got a decent restaurant choice but otherwise it’s nothing too special.

Ahhh and we got to observe an insane intensity rain there…

Anyway, the town’s got a good boat service to Railay, although it might be a long walk on the wet sand from/to the boat if the tide is low.

When we finally got to Railay it felt like a wee paradise, even if it’s a popular and even slightly crowded place. First thing we did there, we went up to the view point, although it wasn’t so much of a viewpoint for me since I couldn’t trust an old ladder and didn’t really get up to the top (Craig was kind enough to share his photos).

We also tried sea kayaking, but my sea sickness quickly kicked in so I was desperate to get out of water. 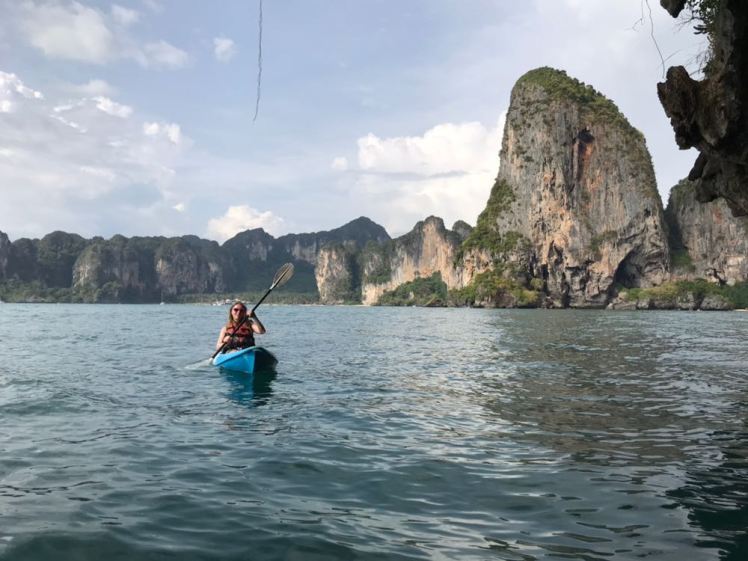 We also booked a climbing session for the next day. I’d never climbed before, but was keen to try. Craig used to climb and was really keen to do it in one of the top climbing locations in the world.

The next day when the time was to tackle my first route ever, I was really freaking out. I’m scared of heights and that fear really kicked in. I was hanging on the wall almost in tears. I felt weak and stupid that I agreed to do that sort of thing. But those feelings also made me angry and the anger turned into determination. When I went back to Scotland I was soon doing a proper training course and climbing twice a week. It’s been almost two years now, I’m still scared of heights but the climbing and the fear of it remind me that I’m alive and give me a sense of achievement. 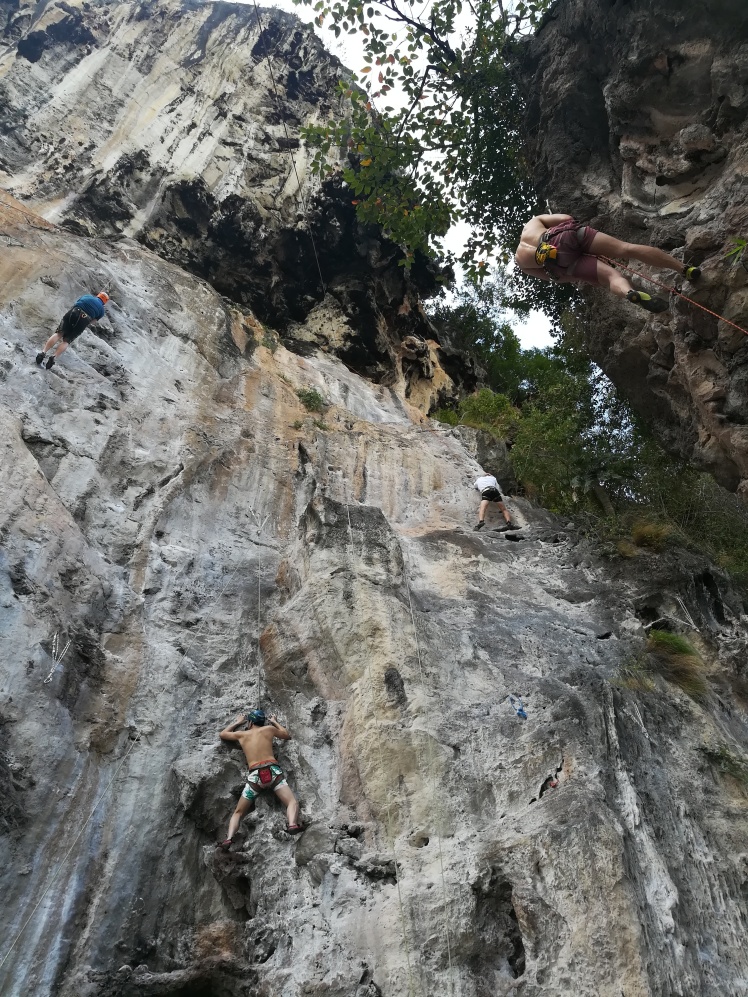 After the day of climbing we were exhausted and decided to rent a scooter and explore Krabi town. When we got there we realised there wasn’t much to see. We ended up cruising around and enjoying the karst hill scenery. Somehow we ended up in this national park (would love if anyone could tell me where I was) with a couple of waterfalls and a view point. The waterfalls were ok, but I was not ready to go up to the viewpoint. I was wearing a dress and a pair of flip flops that were barely holding together and would pop out from time to time (Craig was amused by every “blow out”) so I ended up hiking barefoot. It was a really steep way up, I was sweating loads and when we nearly got to the top we met this German guy who looked exhausted and almost unable to speak. He was just shaking his head and saying noooooo on his way down. Soon we found out that the viewpoint is just a wee gap between the trees and it was so hazy that you couldn’t see anything. What a waste of effort! 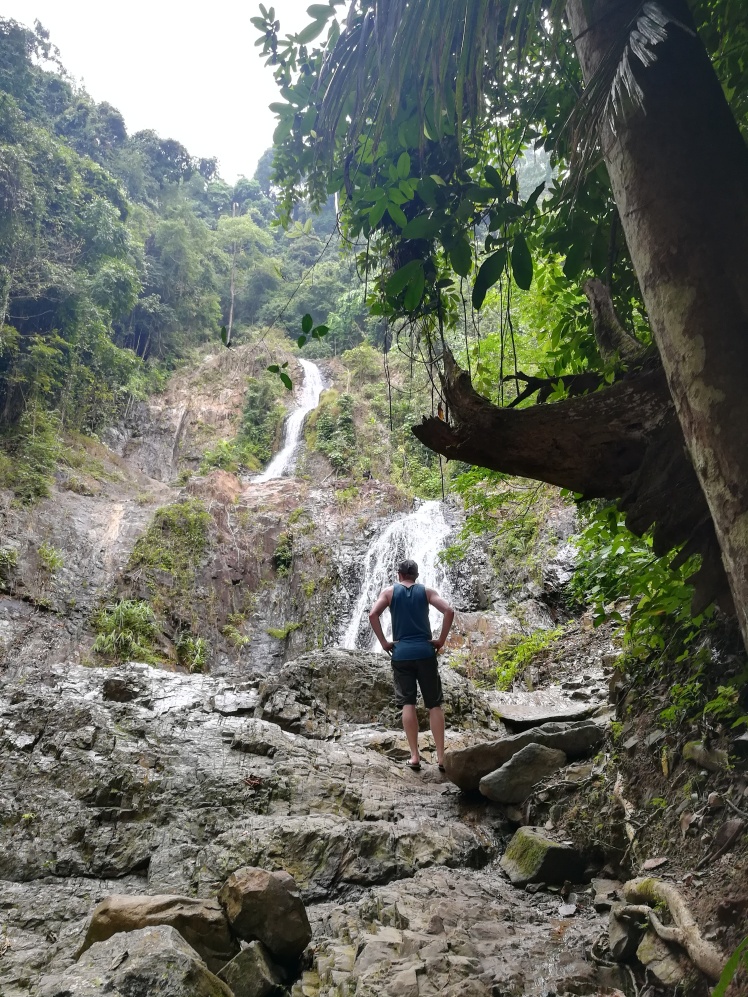 Wouldn’t recommend going there, but I don’t know how the place is called so I just trust you not to get there by mistake.

For our last night we decided to move to Tonsai. You can walk there from Railay through water and over the rocks, which is a bit tricky when carrying large backpacks. There is this big wall separating private land near the beach and the houses. It’s a very chilled environment and loads of rock climbers like to stay there. The accommodation was basic but chilled so I really enjoyed it. We had a very trippy evening, swimming and watching rock climbers and base jumpers that so unexpectedly showed up when we decided to stay a bit longer in the water. We went to sleep early just to wake up early the next morning. 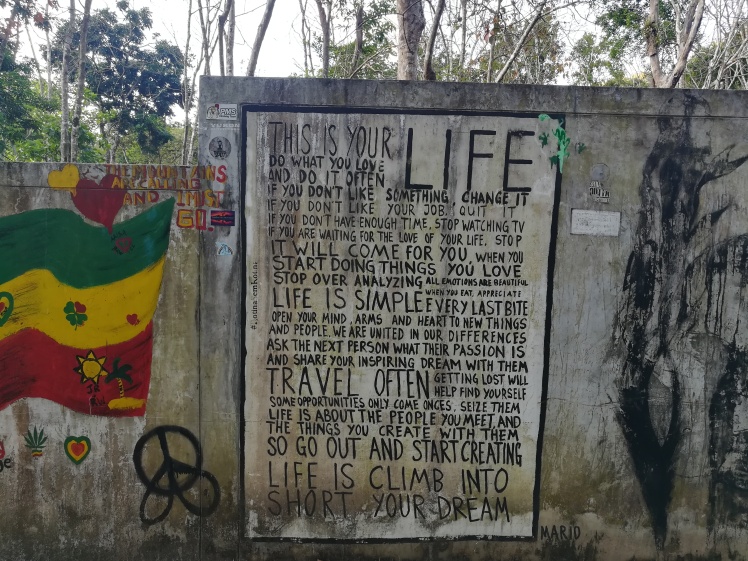 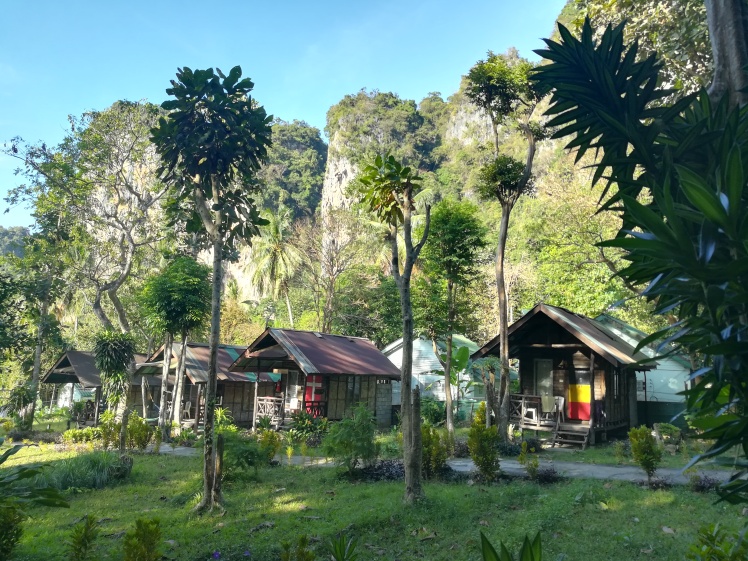 On the way to the beach that morning I spotted some dusky leaf monkeys sitting on the trees. It was the first time I saw them live and they looked really cute, but not when one of them climbed down and started showing its teeth. I was scared and thought it would attack me so ran away quickly. Never trusting any monkeys again! 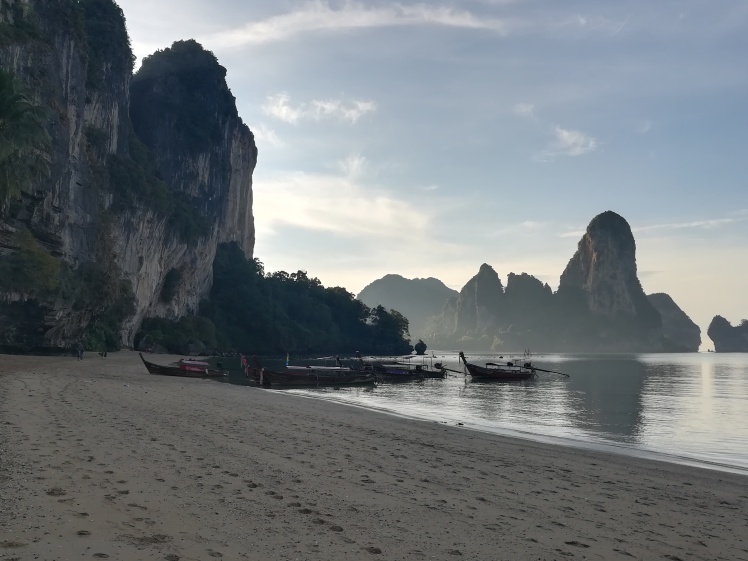 It was a shame the tide was low that morning so we couldn’t go for a swim no matter how far in we were going. Anyway, it was time to pack and go home, the awesome holiday was over… 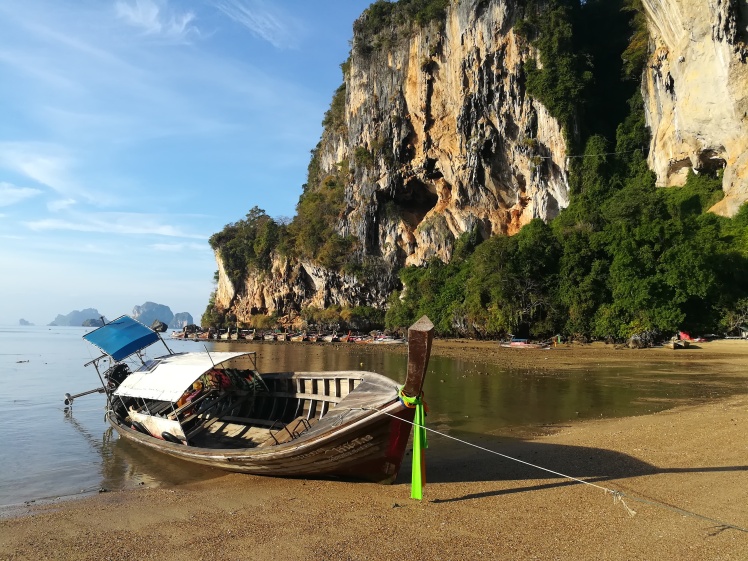 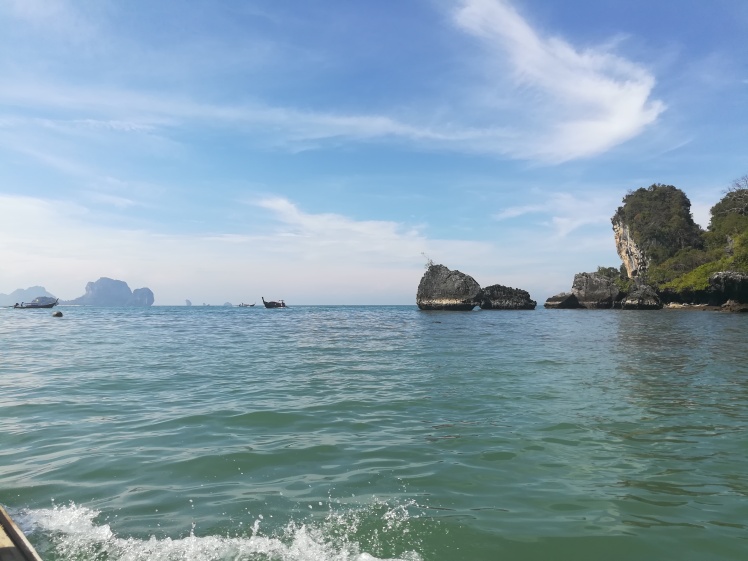 5 thoughts on “Railay, Tonsai and My Last Days in Thailand”