The first time I decided to climb a mountain was couple of winters ago. I didn’t just choose the mountain, but I had to pick the highest one in Scotland – Ben Nevis. Well, having in mind that it was (almost) winter and I didn’t even know what to expect, I thought it was a decent challenge. I found a person who also loved adventures and a few days later we were in the train heading to Fort William.

It was a great time to get out of the city. The exams were coming, I was stressed and all of my friends were stressed, so I thought a wee distraction would be quite refreshing. The plan was to spend five days in the Ben Nevis Inn & Bunkhouse, do some studying for the exams, explore the area and reach the peak of Ben Nevis.

When we got there it turned out that the bunkhouse was in the middle of nowhere, barely even heated and with no internet. That was amazing! Well, it wasn’t extremely good for studying, but being in a complete silence and peace was so nice and refreshing. There was a restaurant upstairs which served amazing food, but it wasn’t cheap. Thus most of the evenings we spend drinking, eating and studying in the Weatherspoon’s in town. We had our bikes with us so it wasn’t a problem to get there.

We didn’t tried to conquer Ben Nevis on the first day – the weather wasn’t the best and we decided to wait. Meanwhile, we were exploring the surrounding areas and took the train to Mallaig (yes, the same railway line as for Hogwarts Express). My friend used to work in Morar, which is just outside Mallaig, and she told me about the beautiful white sand beach there. We decided to cycle there and it was probably the first time in Scotland when going down the hill I had to pedal as hard as I could – that’s how strong the wind was. But it was worth it! 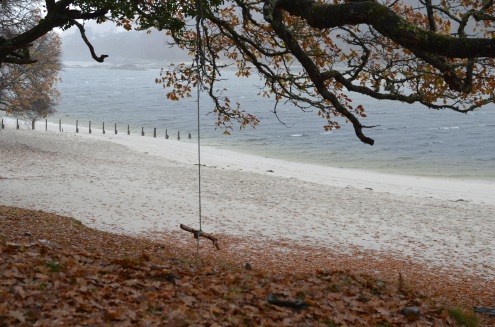 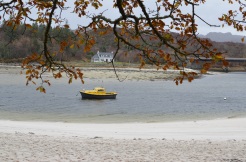 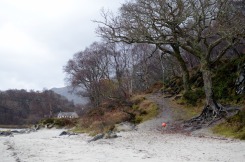 When the day came to try to reach the top I was super excited. We left early in the morning, as we didn’t want to be stuck on the mountain when it gets dark – days were so depressingly short… Anyway, I was almost running up the hill for the first couple of hours – that’s how excited I was. The path itself wasn’t really challenging and we were enjoying the walk. The weather was quite nice as well. But then everything started getting a bit more challenging. You could feel the temperature dropping and soon we saw the first snow. Our first snow that year! Yayyy! 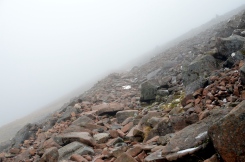 Everything started becoming whiter and whiter and it felt so surreal. It seemed that nothing else excited, just this white wall with occasional piles of rocks. It’s hard to explain the feeling, especially if that’s your first time on the mountain. And it’s hard to explain that happiness when you reach the top. You don’t feel cold anymore and you can’t believe you are there as well. Of course we couldn’t see those beautiful views from the top that you get when you google Ben Nevis, as we were just standing in the cloud.

There was a little hut on the top and some ruins of previous observatory. Apparently before it was built a man called Clement Wragge volunteered to go up Ben Nevis every single day to collect meteorological data during the summer months in 1881. He continued his work for another couple of years afterwards. Imagine that! Climbing the mountain every day for a few months… We had our lunch in the little hut together with some other climbers. It was so nice to sit there, share food and the excitement of being on the top. 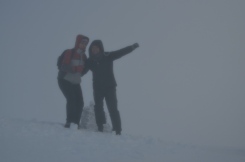 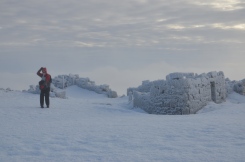 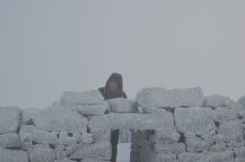 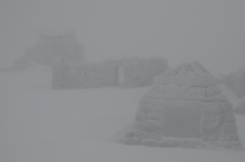 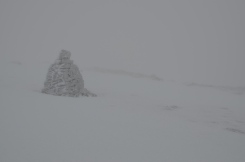 Getting down was relatively easy. At the very top we were sliding down on our bums, as it was easier and more fun than just walking. We were screaming something in Lithuanian and then from far away we heard “Labas” meaning hi. Well that was unexpected!

At some point getting down became quite a challenge: our the legs started shaking and we got really tired. I was extremely proud we managed to reach out goal and I guess proper clothing was the most important factor for the success.

The next day we spent cycling around the area. We covered quite a bit having in mind our sore muscles – a bit over 50km. But the places were just beautiful and worth every effort. 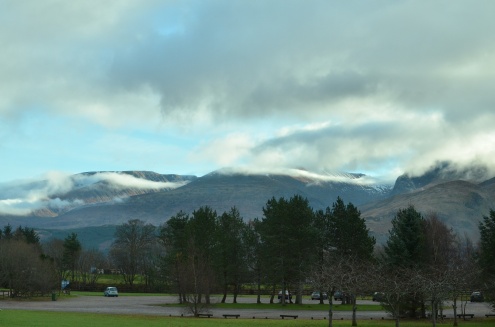 Well, overall, it was a good break before exams and it was a perfect way to recharge my battery. And I passed all the exams as well 🙂

I got to climb Ben Nevis again, a year and a half later, this time in summer. And you know what? Even though it was tough in winter it was so much worse in summer. It was raining so much that even the waterproofs gave up and there were too many people around… It was quite a nice warm summer day when we started, so loads of people were walking in shorts or jeans. That’s a mistake easy to make! In a cold wind and rain those people were freezing and it was disgusting to see their purple legs. Well, what I’m trying to say that the mountain is mysterious and you never know what to expect from it. Be prepared and enjoy 😉

4 thoughts on “The First Mountain Experience”